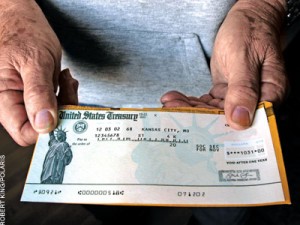 President Obama on Tuesday said he cannot guarantee that retirees will receive their Social Security checks August 3 if Democrats and Republicans in Washington do not reach an agreement on reducing the deficit in the coming weeks.

“I cannot guarantee that those checks go out on August 3rd if we haven’t resolved this issue. Because there may simply not be the money in the coffers to do it,” Mr. Obama said in an interview with CBS Evening News anchor Scott Pelley, according to excerpts released by CBS News.

in a related story…

“This is the United States of America and, you know, we don’t manage our affairs in three-month increments. You know, we don’t risk U.S. default on our obligations because we can’t put politics aside,” Mr. Obama told reporters at the White House yesterday.

Not sure this is jackassary, but it’s close.

Does anything say “jackass” louder than a tank top? Unless you are at the gym, or engaged in some other sport, wearing a tank top in public is a far greater faux pas than wearing shorts before Memorial Day or after Labor Day any time of  year. The only exception would be if your name…

Here’s another great jackass I am sure you know. This is the guy in the convenience store/gas station who is talking on the phone (usually loudly in another language) that continues to talk while you are trying to consummate your transaction. This is wrong for so many reasons. Above all it is just rude. I…

When I want to leave a message all I really want to know is did I reach the right number/person. Everything else, is extraneous. I also don’t require directions. I pretty much have the whole message-leaving business under control. Leave it to the jackasses, however,  to mess up this simple task. What began innocently enough,…

It’s not the parent’s fault if their child is a genius (actually, genetically speaking, it is!). But really do you need to tell us about it…over and over? Let me help you out Jackass. No, you don’t. Honestly, we really don’t care about your child’s test scores. This is because  (in case you haven’t noticed) in the…